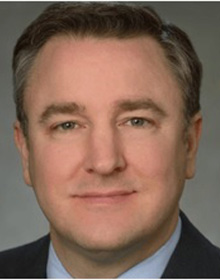 Craig A. Umscheid is a general internist and clinical epidemiologist who serves as the Director of the Evidence-based Practice Center Division and Senior Science Advisor at the Agency for Healthcare Research and Quality (AHRQ).

Dr. Umscheid received his undergraduate degree from Cornell, his medical degree from Georgetown, trained in internal medicine at the University of Chicago, and received a master of science degree in clinical epidemiology from the University of Pennsylvania, where he was a physician-scientist fellow supported by a National Research Service Award. Prior to joining AHRQ, Dr. Umscheid was an associate professor at the University of Chicago, where he served as the chief quality and innovation officer and vice president of healthcare delivery science, with oversight of clinical quality, medical informatics, and clinical innovation. He began his career at the University of Pennsylvania, where he became an associate professor of medicine and epidemiology and vice chair of quality and safety for the Department of Medicine, and was a co-founder and director of Penn Medicine’s Center for Evidence-based Practice.

His career has been dedicated to developing, implementing, and evaluating approaches to integrate research evidence into practice across provider organizations in the pursuit of improving the quality and value of patient care. This work has been supported by AHRQ, the Patient Centered Outcomes Research Institute (PCORI), the Centers for Disease Control and Prevention (CDC), and the National Institutes of Health and has been described in over 125 peer-reviewed publications and cited over 10,000 times. Dr. Umscheid has co-authored clinical practice guidelines with the National Institutes of Health, CDC, and Infectious Diseases Society of America, co-led an AHRQ Evidence-based Practice Center at Penn, directed a Cochrane US Network affiliate at the University of Chicago, is a former chair of the PCORI Advisory Panel on Healthcare Delivery and Disparities Research, a former chair of the Society of General Internal Medicine's Evidence-Based Medicine Task Force, a former deputy editor of the Journal of General Internal Medicine, and a past member of AHRQ’s Patient Centered Clinical Decision Support Learning Network Steering Committee and the Medicare Evidence Development and Coverage Advisory Committee.