This item is available in PDF only (Final Report [2.2 MB]). Persons using assistive technology may not be able to fully access information in this file. For assistance, please contact us.

Note: This report is greater than 5 years old. Findings may be used for research purposes but should not be considered current.

With the recent development of embolic protection devices, several randomized trials have compared carotid endarterectomy with percutaneous carotid artery stenting in patients with carotid artery disease and have had mixed results regarding death, myocardial infarction, and stroke.13,14 Carotid stenting has been proposed as a therapeutic option for patients at high risk for surgical revascularization.15 In October 2004, the US Centers for Medicare & Medicaid Services (CMS) issued a national coverage decision supporting the use of Food and Drug Administration–approved carotid artery stents with embolic protection devices for symptomatic patients at high surgical risk or in the context of a clinical trial. In light of that decision and its potential influence on the use of carotid revascularization, we examined geographic variation in and predictors of carotid endarterectomy and carotid stenting among elderly Medicare beneficiaries in the United States.

We obtained all inpatient, outpatient, and carrier claim files from CMS for all Medicare beneficiaries who underwent carotid endarterectomy or carotid stenting during the period January 1, 2003, through December 31, 2006. We also obtained all claims for all beneficiaries who underwent carotid magnetic resonance angiography (MRA) or x-ray angiography (invasive or noninvasive) during the same period. The inpatient files contain institutional claims for facility costs covered under Medicare Part A. The outpatient files contain claims from outpatient providers covered under Medicare Part B. The carrier files contain claims from noninstitutional providers for services covered under Medicare Part B. In addition, we obtained denominator files for 100% of Medicare beneficiaries from 2003 through 2006. The denominator files contain beneficiary demographic characteristics, dates of death, and program eligibility and enrollment information. We limited the analysis to beneficiaries living in the United States who were aged 65 years or older. We included only claims filed during periods of fee-for-service coverage. The institutional review board of the Duke University Health System approved the study.

Patient demographic characteristics included age, sex, race, and state of residence. In this analysis, we used the self-reported race category “black” and combined all other categories as “nonblack.”16 We used state of residence to group beneficiaries into 9 US Census regions. We also assigned each beneficiary to 1 of 306 hospital referral regions (HRRs) according to ZIP code of residence.17

For each patient, we defined the first MRA or x-ray angiography between January 1, 2004, and December 31, 2006, as the index event and followed up the patient for 1 year to identify the use of carotid revascularization. Because detailed data on clinical indications for carotid revascularization are not available in claims data, we used prior angiography (invasive or noninvasive) as a proxy for potential eligibility for revascularization. We limited the cohort to patients with 12 months of Medicare eligibility prior to the index date. We used logistic regression models to assess the independent effects of age, sex, race, US Census region, comorbid conditions, and index year on the use of carotid endarterectomy or carotid stenting.

From 2003 through 2006, 320 354 carotid endarterectomies were performed in elderly Medicare beneficiaries (Table 2). The rate of carotid endarterectomy fell slightly during this period from 3.2 to 2.6 per 1000 person-years. In 2005 and 2006, 19 444 carotid stenting procedures were performed in Medicare beneficiaries aged 65 years or older. The rate of carotid stenting and the absolute number increased from 2005 to 2006. The overall rate of carotid revascularization did not increase during the study period.

Finally, the 30-day mortality rate for carotid endarterectomy (1.2%) in 2005 was lower than the rates of 1.7% to 2.5% reported in the mid-1990s11 but remains higher than the rates of 0.5% to 0.8% published in the studies that led to regulatory approval of the procedure.4,5 Likewise, the 30-day mortality rate for carotid stenting (2.3%) was higher than the rates reported in the initial randomized trial of carotid stenting with embolic protection devices (1.2%).14 Because this analysis was limited to elderly Medicare beneficiaries, the differences between the mortality rates we observed and those reported in clinical trials are not unexpected. The differences likely reflect the differential selection of high-risk patients into the carotid stenting cohort, consistent with the CMS national coverage decision.

Our study has some limitations. First, Medicare claims data do not include information about symptom status, the presence of high surgical risk features like contralateral carotid occlusion, the presence of significant coronary artery disease and heart failure, and patient preferences. These variables are unlikely to explain the substantial geographic variation we observed but may lessen some of the observed differences. Unmeasured clinical variables may also confound the relationship between observed covariates and the receipt of carotid revascularization in the multivariable model. Second, the absence of detailed clinical data prevented us from calculating risk-adjusted mortality rates. To adjust the comparisons on the basis of the available data—and therefore imply risk-adjustment—would be misleading. Third, because we restricted the multivariable analyses to patients who underwent MRA or angiography (invasive or noninvasive), the results may not be generalizable to patients for whom revascularization was preceded by carotid ultrasound only. Fourth, the analysis included only patients enrolled in fee-for-service Medicare, so the generalizability of the results to all Medicare beneficiaries is unclear. Finally, we observed patients from the time they became eligible for Medicare, so carotid revascularization in patients younger than 65 years is not reflected in the analysis.

There was significant geographic variation in the use of carotid endarterectomy and carotid stenting among Medicare beneficiaries and variation in the carotid imaging modalities used prior to revascularization. Moreover, men and patients with a prior diagnosis of peripheral vascular disease were more likely to undergo carotid revascularization, and patients with a prior diagnosis of coronary artery disease or a prior carotid endarterectomy were more likely to undergo carotid stenting. These findings suggest that the development of consensus regarding clinical criteria for carotid imaging, such as a national standard for appropriate use criteria, is required. Moreover, these data highlight important differences between patients who undergo carotid revascularization with carotid endarterectomy and those who undergo stenting with embolic protection. Ongoing clinical trials will provide critical guidance for the treatment of patients who are eligible for either method of revascularization.

Additional Contributions: We thank Damon M. Seils, MA, Duke University, for editorial assistance and manuscript preparation. Mr Seils did not receive compensation for his assistance apart from his employment at the institution where the study was conducted.

Figure 1A. Ratio of the rate of carotid endarterectomy by hospital referral region to the U.S. national average, 2003–2004 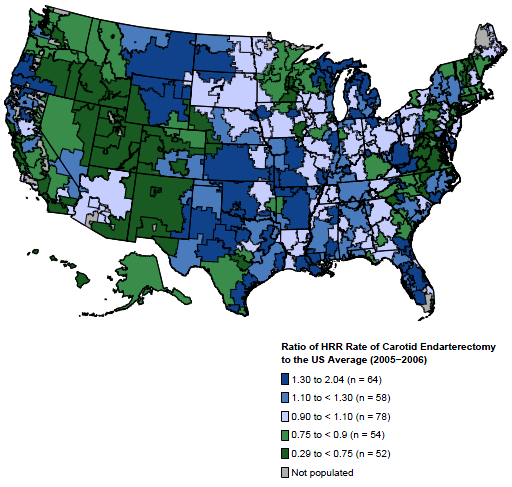 Figure 1B. Ratio of the rate of carotid stenting by hospital regerral region to the U.S. national average, 2005-2006 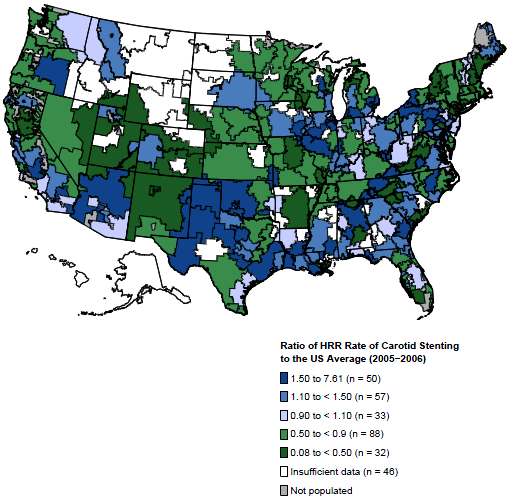