This is a chapter from AHRQ's Methods Guide for Medical Test Reviews.

This is a chapter from AHRQ's Methods Guide for Medical Test Reviews.

The basic definitions of test performance are based upon a 2×2 cross tabulation of the “true disease status” and the test results (Appendix Table). Ostensibly simple, the information in a 2×2 table can be summarized in several ways—some of which are mathematically equivalent (e.g., sensitivity/specificity vs. positive/negative likelihood ratios)—and these measures and their application can be confusing in practice.1 The basic measures are described briefly below; for a discussion on their relative merits and drawbacks, see Tatsioni et al.2

The two measures have clear clinical interpretations, but are not as useful clinically as the positive and negative predictive values (see below). Sensitivity and specificity are negatively correlated with each other with respect to diagnostic thresholds. If the threshold (cutpoint) for test positive is set higher—say when the test provides a continuously valued result—sensitivity will decrease while specificity will increase. On the other hand, if the threshold is lower, we will see an increase in sensitivity and a corresponding decrease in specificity. This non-independence of sensitivity and specificity across explicit or implicit diagnostic thresholds poses challenges for quantitative synthesis.

When several thresholds have been considered for a single set of data, a receiver operating characteristic (ROC) curve could be obtained by plotting sensitivity vs. 1–specificity. (Appendix Figure). The ROC curve depicts the observed patterns of sensitivity and specificity at different thresholds, as well as the negative correlation between the two measures. As we will discuss below, one way to summarize diagnostic accuracy data is to calculate a summary ROC curve.

Note that the closer a study point is to the upper left corner of the plot, the better its diagnostic ability. 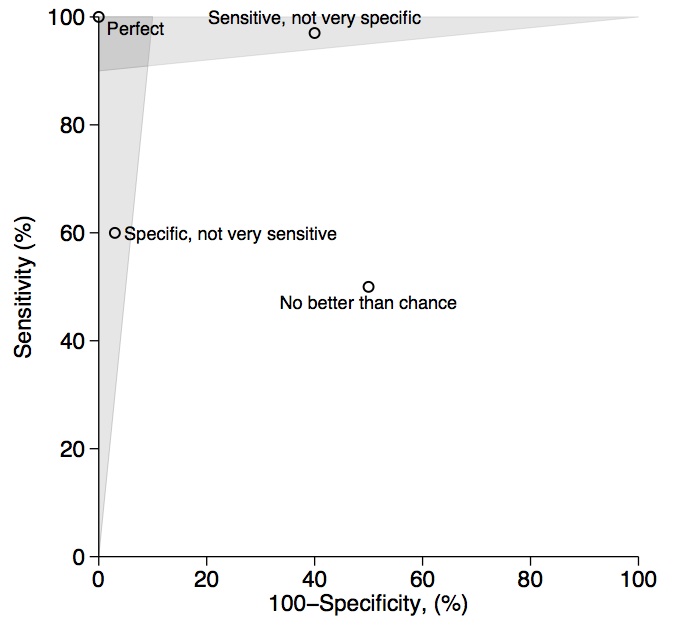 Four hypothetical studies are depicted in the square sensitivity/100 percent–specificity plot. The closer a study is to the upper-left corner of the plot, the better its diagnostic ability. Studies lying on the major diagonal of the plot have no diagnostic ability (no better than chance). Studies lying on the left shaded area have positive likelihood ratio (LR+) of 10 or more. Studies lying on the top shaded area have negative likelihood ratio (LR-) of 0.1 or less. Studies lying on the intersection of the grey areas (darker grey polygon) have both LR+>10 and LR-<0.1. Screening tests typically operate in the less shaded areas, whereas confirmatory tests used to rule out a diagnosis often operate near or in the top shaded area. The systematic reviewer must be familiar with the mentioned measures and their interpretation: the same medical test can be used in different settings and roles, and different measures will best capture its performance each time.

The positive and negative likelihood ratios (LR+ and LR-, respectively) quantify the change in the certainty of the “diagnosis” conferred by test results. More specifically, the likelihood ratios transform the pretest odds to the posttest odds of a given (positive or negative) diagnosis:

Positive predictive value is the probability of disease given a positive test and negative predictive value is the probability of no disease following a negative test. These values are highly useful for clinical purposes because they give the clinician an indication of the likelihood of disease or a specific event such as death following the results of the medical test.

Positive and negative predictive values depend upon disease prevalence, which is unlikely to be consistent among studies. Therefore, they are often calculated for a range of plausible prevalence values and tabulated or plotted in graphs.

This product is part of a curated collection. Check out other items in this collection.

Methods Guide – Chapter | Nov 3, 2017
Chapter 8: Meta-Analysis of Test Performance When There Is a “Gold Standard”